Travis Irvine will not be silenced.

Despite being excluded from the Governor’s Debate tonight, and no invites yet for the two coming next month, Travis Irvine will make his answers available for everyone.
Help us get Travis trending! Follow along, comment and retweet at: 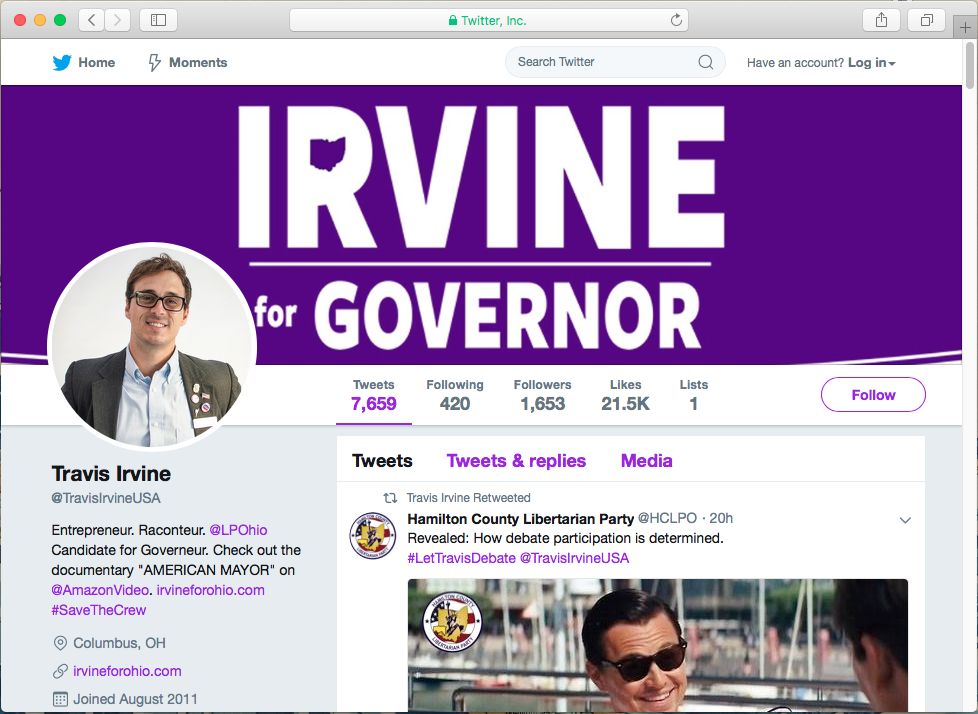 Let’s make a noise that can’t be ignored!

Working as a volunteer is easy with Contactshelper! 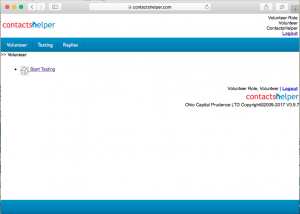 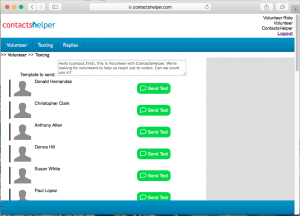 As a volunteer you don’t need to worry about who you’re texting or even what to write to get started. Click on the “Send Text” button to the right of the contact name and the template shown at top will be sent to the contact. 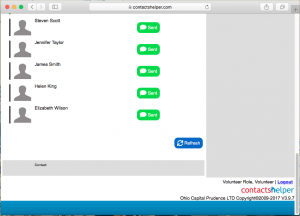 That is the Contactshelper system connecting you to the voter or donor.

Work through the list of contacts on the page, when all have switched to “Sent” click on Refresh to load more. 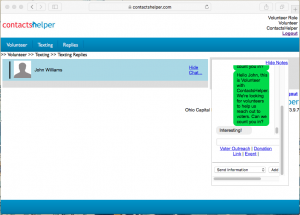 When you run out of contacts or need to be done, you can check on the Replies page to see who has answered your texts. As people respond to your texts a number next to the Replies link will increase. While you are chatting with voters or donors new replies will appear at the top of the page and show with a green chat bubble that they have a message you have not seen. Clicking on Show Chat will reveal the chat sidebar and mark that message as seen. Use the chat sidebar to answer questions, share links and inform the voter or donor about our campaign.
When the contact sees your text on their phone they will see the main campaign number, not your number. If they text back later, the text will be added to the chat and the volunteer coordinator will follow up.
When texting with Contactshelper you don’t see their phone number and they do not see yours.

When chatting with a contact you may also use “quick chat” templates provided by your volunteer coordinator for this campaign. These appear below the chat box and button. These links place text into the chat box, often with the contact’s name merged, sharing links or event information.
In addition to chatting with the contact you can leave notes. Please take the time to note the response you received for your outreach, even marking “No Answer” is helpful for the campaign coordinator to keep track of your effort and success.
Thank you for volunteering! Your help is appreciated!

When asked about voters that supported Dennis Kucinich in the Democratic primary and Mary Taylor in the Republican primary was candid about understanding their issues.

“Basically, both groups of voters are single-issue voters,” Irvine said. “With Dennis Kucinich, his numbers were higher in counties where the opioid crisis is ravaging communities and the reason he got higher numbers there is because he spoke about legalizing marijuana.”

The Libertarian Party has always supported the legalization of marijuana for all uses and many people believe that marijuana could be a way to wean those struggling with addiction off opioids.

Regarding supporters of Mary Taylor, Travis says it comes down to what people think of Mike DeWine.

“Mike DeWine is an old, establishment Republican, people don’t know where he stands on issues,” Irvine said. “People are looking for new options. The Libertarians offer people an outsider perspective into politics.”

You can watch the full interview.

Donate today to support Irvine for Ohio and our Libertarian candidates across the state!

Learn more about Irvine for Ohio.

Show your support for Libertarian Candidates across Franklin County and Ohio, Donate, Volunteerand Get Involved!

Months and months of hard work have been paying off as we cross the ballot-access finish line in more states.

This week, we add Connecticut, New York, and Pennsylvania to the tally.

It is also worth noting and celebrating that this is the first time in
20 years that voters in Connecticut will be able to vote for a Libertarian candidate for Governor!

Regarding at least some Libertarians on the ballot in all 50 states, Richard Winger, editor of Ballot Access News commented, “no other alternative party can be shown to have reached this midterm milestone since 1890, when official balloting began.”

Please join me in congratulating and thanking all those who have pitched in to achieve ballot access for 2018. This includes thousands of activists, volunteers, donors, and staff and the Johnson/Weld campaign which achieved ballot access for us in 37 of these states.